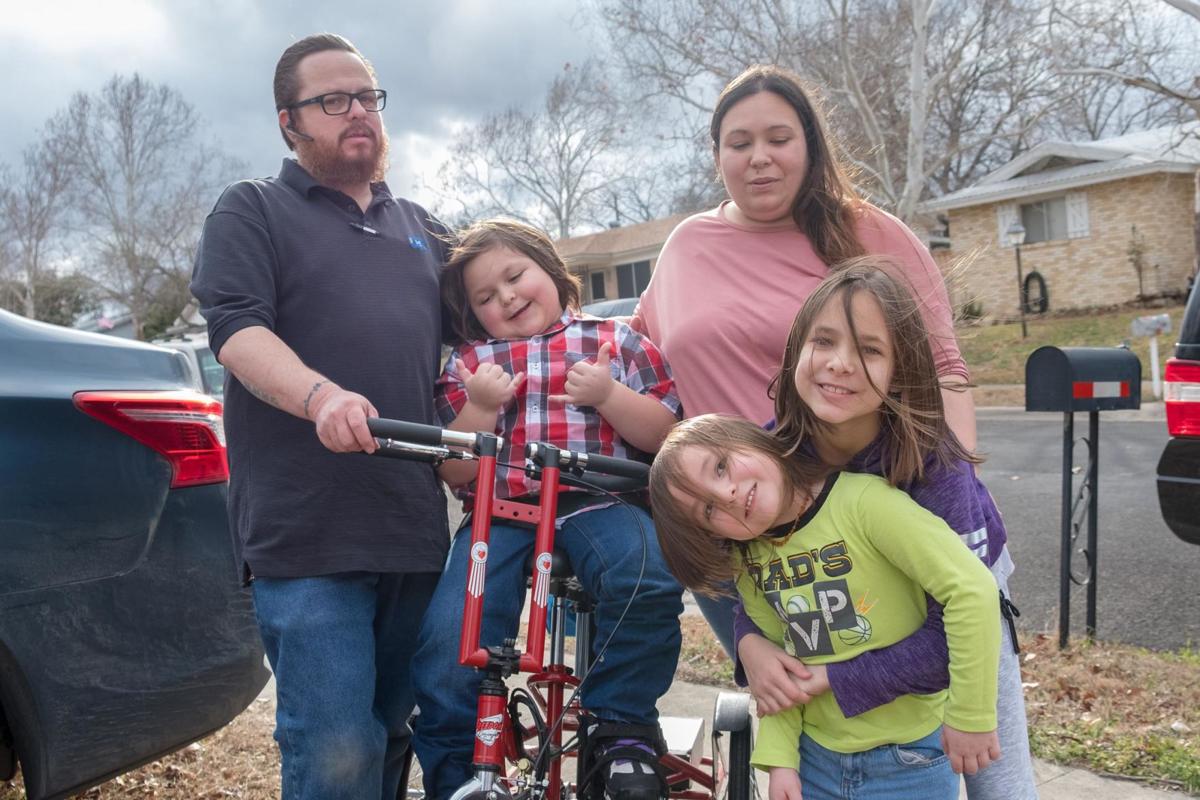 Through their Medicaid health plan the Clark family has been able to access a brand-new life-changing drug for their 8-year-old son Sawyer, who has spinal muscular atrophy.

Copperas Cove second-grader Sawyer Clark, 8, is like many boys — he loves anything loud, plays video games and enjoys swimming. But he is different from most children because he was born with spinal muscular atrophy type 3, a rare genetic disorder that doesn’t let his body make the proteins needed to build muscles.

“He must use a wheelchair or a walker to move and for stability. Otherwise, he is all boy,” said mom Brandi Clark.

Spinal muscular atrophy affects the motor nerve cells in the spinal cord. It is caused by a mutation in the survival motor neuron gene 1.

In a healthy person, this gene produces a protein that is critical to the function of the nerves that control our muscles.

Without it, those nerve cells cannot function properly and eventually die, leading to debilitating muscle weakness. The disorder can affect any race or gender with an estimated 9,000 people afflicted with it in the United States.

Yet, hope is on the medical horizon for Sawyer and others in the form of a new drug, Spinraza. In December 2016, it became the first drug approved by the Federal Drug Administration to treat spinal muscular atrophy.

“As far as I know, Sawyer is the first person in this area to receive the treatment,” said his mother.

While a patient is under general anesthesia, a doctor administers the drug directly to the patient’s central nervous system, like a spinal tap procedure, with an injection.

This treatment is not a cure, but it does halt the progression of the disorder, giving a patient more range of motion, increased stamina and better quality of life.

In October, Brandi and Chad Clark applied for their son to receive the treatment since doctors said Sawyer was a good candidate.

Earlier this year, they received approval to proceed with the Spinraza treatment. Sawyer will undergo a series of four injections over a three-month period starting with the first one and followed by the second injection at day 14, the third on day 30 and the last injection on day 60.

After that, he will receive an injection every fourth month for the rest of his life.

“Usually, the patient doesn’t feel improvement until the seventh injection,” she said.

The cost for the treatment is staggering - $750,000 for the first year with a price of $125,000 per injection. Thankfully, the treatment cost s are covered 100-percent by Blue Cross and Blue Shield of Texas Star Kids Plan through Supplemental Security Income (SSI) Disability & Medicaid coverage.

The Clarks traveled to the Children’s Medical Center of Dallas on Feb. 6 to start Sawyer’s treatment. Brandi Clark called it the longest trip of her life. Once at the hospital, the staff amazed her.

“Sawyer was treated like a little king,” she said. “The hospital staff answered all my questions and took great care of my son.

”Normally, the procedure takes about an hour, but in Sawyer’s case, it was less than 30 minutes. Outside in the waiting room, Brandi Clark ran through a range of emotions from excitement to anxiety and called and texted friends and family to ease her nerves.

“They had a lot of words of love and encouragement,” she recalled.

Sawyer remained in the hospital overnight and the family returned home Feb. 7 with Sawyer going back to Fairview-Miss Jewell Elementary School on Feb. 8.

Except for some soreness at the injection site on his lower back, he had no side effects.

“I feel good,” said Sawyer Clark, “it didn’t hurt that much.”

Older sister Lily Clark, 10, and younger brother Joseph, 5, are excited at the prospect of Sawyer being able to play more and longer with them.

“A whole new chapter for Sawyer and our family has started,” said Chad Clark, who is optimistic. “It’s a little early to tell, but I’m really hopeful this will help him.”

For more information, go to CureSMA.org.